By IPSA AdminDecember 11, 2020No Comments

Ireland is in a good position to withstand and recover quickly from the COVID19 economic crisis due to a combination of the health of the economy prior to the pandemic and good fiscal decisions taken since it started.

Speaking during the IPSA annual Jack FitzPatrick Lecture webinar, economist Seamus Coffey said that lessons appeared to have been learned from the 1930s, 1940s, 1950s, 1980s and 2008, when decisions made previous governments exacerbated and deepened economic crises.

Mr Coffey, a lecturer at UCC and former chair of the Irish Fiscal Advisory Council, praised the counter-cyclical fiscal policy of spending to support the economy.

He said: “This is the first time since oil crisis of 1973-74 that the Government has responded appropriately to a negative shock by pumping those billions into the economy. From an Irish perspective this response is unusual. Typically, governments have made crises worse – increasing taxes, spending cuts, austerity leading to migration – they have a bad record of fiscal policy. But because of the circumstances, the crisis of 2020 could be a textbook case study in how you do a counter-cyclical response to a negative shock.”

Mr Coffey said strength of the economy had strengthened the Government’s hand. Ireland entered the COVID19 pandemic with a trade surplus and a strong balance of payments, whereas with all other crises a deterioration in the balance of payments was a prelude to the impending downturn. 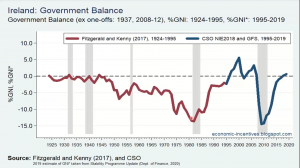 He said: “Yes, they are getting fiscal policy right but they are able to do so because of relative strength of economy before the crisis. This is a global crisis and central banks like the ECB have allowed governments to take this sort of action and there is little dispute that it is the right thing to do. Any concern would be over the medium to long term but let’s worry about today and get through that first and then we can right our house a couple of years down the line.”

Government debt had also reduced from 150% of Gross National Income in 2010 to around 100% this year which means that Ireland is in a position to take advantage of historically low interest rates and borrow heavily not just this year but also into the future if need be.

Mr Coffey said: “Borrowing can be sustained over the next couple of years because the risks of insolvency and austerity have diminished. It’s not 1980s or 2008. Order will have to be restored longer term – and there will be consequences – but the priority is here and now.

“Tax revenues have also held up well because parts of the economy are largely unaffected. Multinationals, the public sector, professionals services are still paying their income tax and they tend to be higher paying. The affected parts of the economy – services, non-essential retail, catering – are lower paying so tax revenue has held up.”

Studies have shown that companies with some form of employee share ownership withstand economic downturns and retain jobs better than other businesses in times of crisis. Mr Coffey said such companies are better placed to both survive and thrive.

“Incentives (such as employee share ownership) lead to more positive outcomes generally. For businesses outside of affected sectors, it might be a case of weathering the storm and then tapping into the expected rise in consumer demand afterwards. For companies in sectors badly affected, with ownership comes added incentive for the company to survive and benefit from the recovery.”

View the Jack FitzPatrick Lecture at this link.